Last Friday I had made the decision that I was gonna get some fishing in before this dumb storm pushed in.  I knew that with this storm came the possibility that the fishing which has been so good, would shut off.  I figured Id get out and try Rudee.  I haven't been to Rudee Inlet since the end of July.  The water was pretty cold and the wind was picking up.  Saw a few people from the VB Marine Rescue team out and about that I worked with.  They said it was starting to get snotty outside and the wind was forecasted to pick up even more.  I started by trolling around the islands with no success.  I fished a few parts that I hadn't been to before and pulled out a small speck.  He got a tag and released.  I worked my way back to the boat ramp and heard my name on the radio.  "Windknot Kevin Burns" was out and about peddling his cheater kayak with no problems.  We made it to the ramp just as Tom and Debbie V. were pulling up.  We sat and chatted for a little while and then decided to head back out and try a few more spots before it got to nasty out. 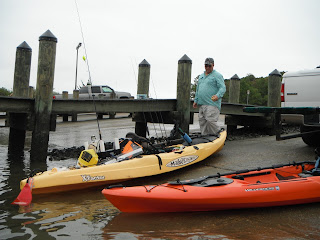 We Paddled back out into the cold NE wind to the front of the inlet.  Trolled around for a bit and threw lures at a few places with no luck.  At this point I was tired.  It was cold and rainy now and the thought of going home and catching an afternoon snooze in front of the fireplaces was looking pretty good.  I decided to troll back on the way in and hoped maybe I would catch some lost fish.  I did.  A monster 10" Bluefish......Screw this I'm going home.. 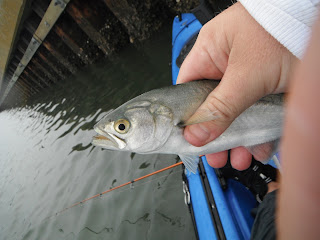 I more of kinda drifted back in because I was so tired.  Really didnt try to fish much.  The lure that I was towign behind was I guess dragging?  I met back up with Tom V.  We BS'd for a while while the wind continued to push us towards the launch.  I picked my pole up and decided maybe I should try to atleast look like a fisherman in front of my friends.   First cast out as im working the curly tail.  Bouncing it along the bottom of owl creek and bam.  The fish takes off and gives me a little run.  I could tell by the fight it was a little puppy drum.  Pulled a little drag on the trout rod and scooped him up in the kayak.  The fish went 17" and looked pretty healthy. He was hooked sorta deepin his mouth so i got the pliers out and had to dig in to get it.  Not far enough down to go into his stomach but enough to where I didn't wanna get my hands close to his crushes in the back of his mouth.  Hook came out with no other problems. 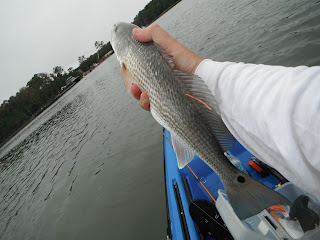 While I was tagging the pup I had throw my lure out over the side.  Not really paying attention to is while I measured tagged and recorded my last catch.  Once I had finished and stowed my tagging kit away  I grabbed my rod and began to reel in.  The line looked like it was tangled around the bolts from my anchor trolley.  I tried to get it lose when my anchor trolley started to pull back?  I reeled it in and there was a 11" flounder on it.  There it is the most half assed slam.  I was almost mad at myself for catching those fish because I really put no effort into them.  There have been days where I have paddled all over the place in heat and humidity only to come back to the launch empty handed. 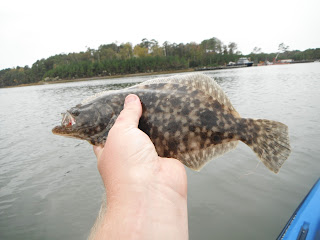 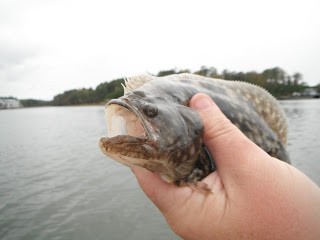 That was it.  I was cold tired and I knew if I tried to fish anymore it would be nothing but disappointment.  I packed up and headed home.  All in all it was a cold and trying day on the water.  The thing that stood out to me was a few laughs with some good fishing buddies.  That's what makes it fun to me...Not the chance of nabbing a sponsor and getting free stuff.  Not the fame from writing a blog or beat my chest on facebook.  The reason I love to fish is because of the people I have met along the way.  So regardless of the commercialization of kayak fishing and the influx of mass blogging on the sport.  If I go out and have a few laughs with my friends on the water, Its still a great day.

Today was a cold day on the water.  Waders we put on due to the water dipping a few degrees along with the wind and cooler temps.  Man I was freezeing.  Today started with a first cast first fish kinda day.  I always hate those because I feel like the rest of the day would be a let down.  I missed alot of fish today for whatever reason.  Tha'ts always frustrating to me.  One of them gave me a really good run too.  Im afraid that may have been that paper trout I've been trying to find.  I ended up with 8 fish total.  3 Specks and 5 Puppy Drum.   I really do enjoy the pups.  They pull hard and are just a blast to catch on light tackle.  The surprise catch of the day came from Asian Rob Lee.  Fishing on a mouth to this small creek he pulled in a little Largemouth Bass.  I figured with all teh rain that the salinity was down and they ventured a little farther out then then normally do.  The fishing was alright and it was cold.  I made an early day out of it.  Heard of some bigger Specks caught too.  Decided to head in and get home a little early.  There was a few bread bowls full of homemade chicken noodle soup waiting for me.  A great day on the water with Rob as always. Untill next time... 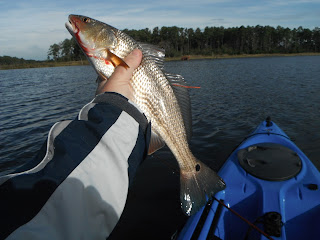 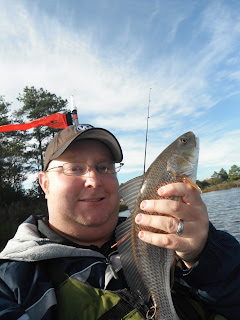 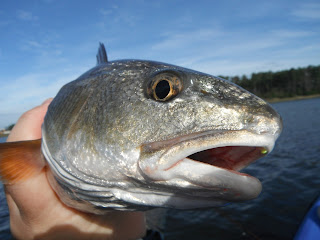 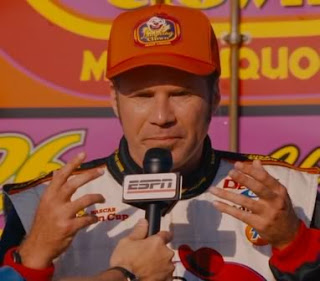 The next 2 pictures are little mini stripers rob caught.  I couldn't stop laughing because all I could think of when he was trying to handle the fish was.  "WHAT DO I DO WITH MY HANDS" 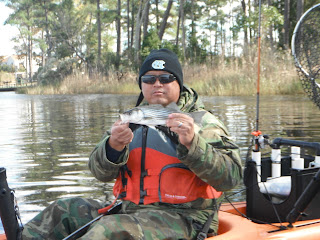 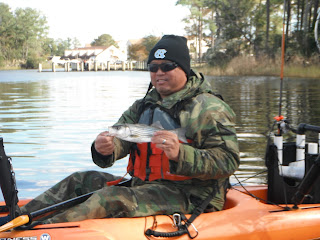 Can you believe this guy has never thrown a cast net either?

Video for your enjoyment