First fish on the Fly..


With all this warm weather floating around this time of year I took the opportunity to hit up the HRBT.  It was flat calm and pretty warm out for December.  I fished with POL's head honcho "Surffishing Dave"  Rob Alderman and a few members of his family.  I first met rob a couple years ago with my friend Al fishing the point.  I had seen his videos  on YouTube of his crazy self chucking a brick on a heaver.  Also known as "The General" he runs the OBX based FishMilitia.com website.

We did pretty well on the night with the Stripers.  I managed 4.  One of them being my first fish on a flyrod.  It wasnt anything to brag about because it was barely big enough ti fit on the measuring board.  My biggest was a nice fat 25"er caught on a curly tail in the lights.  Everyone caught fish and went home happy. 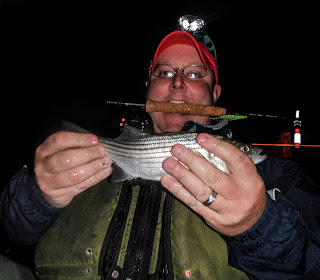 The next day I got another change to hit up the Elizabeth River for Speckled Trout.  This year has been a great year but after 6 hours in the rain I had nothing to show for my time but this picture of a sign coming into the cove. 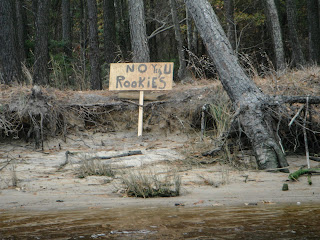 Kiptopeke on the eastern shore was the next stop for the week.  A few friends were up there staying at the lodges for the weekend.  I was surprised how nice the lodges were.  Lots of room and pretty comfy.  I spent a few hours drifting the concrete ships.  Again with no luck.  First time at the ships so I really didnt expect much to begin with.  Most people who caught fish that day were offshore a mile or 2 and a bit North of us.  IAs we were preparing to launch we saw someone from out of town putting his big hobie sail kayak together.  Im not sure as to what model it was but the thign that caught me off guard was he was going out in waders a t-shirt and some flimsy boat cushion PFD.  Why spend $3500 on a kayak only to cheap out on saftery.  That night around sunset it got cold quick.  The rain moved in and I had enough of of myself.  I can only imagine what this nimrod was thinking.  I never saw him make it back to the launch either.   A few days later the Coast Guard had to rescue a kayaker not far from here because they fell out of their kayak and couldnt make it back into it.  Too many people underestimate safety.  The ocean can be a mean thing to deal with in the cold.. 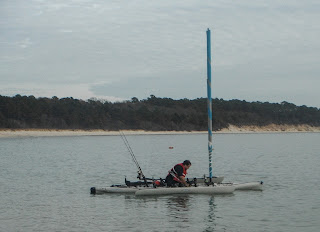 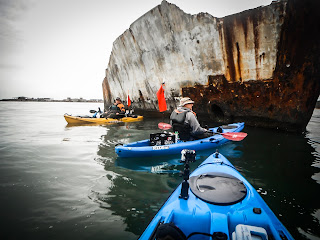 And to wrap it up is the video I put together for these trips.  I hope you enjoy..