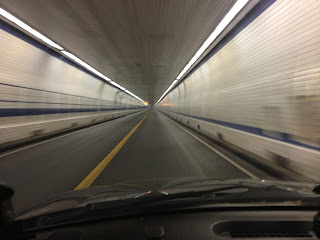 On Saturday September 29th at 4am I awoke to the dreaded alarm going off.  Normally that sound signifies  a 35-45 min drive in to work.  Today it was to get me up to go fish TKAA Annual fishing tournament.  In the past years I had been unable to fish due to work or airshows.  I went in to this tournament with the mindset of just catching something and enjoying myself.  I had eye'd a few places that I had wanted to fish over the weeks leading up to the day.  All my surf casting friends had been killing bull reds from the sand in Back Bay and there were some pretty recent reports of a few kayakers going out and getting a bunch too.  I used to take the old Ride 135 I had through the surf in Hatteras a lot.  With the new rig and added weight I wasn't so sure how it would do and did not want to test it out for the first time on tournament day.  The spot was chosen and plans were made.  I asked my buddy Joe if he wanted to fish with me a few weeks earlier.  I figured at least id have some good company out there if I wasn't catching fish.  Plus he has good taste in kayaks too. 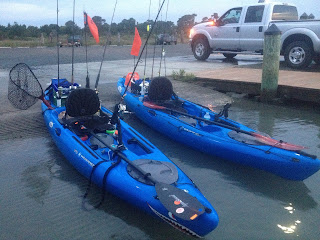 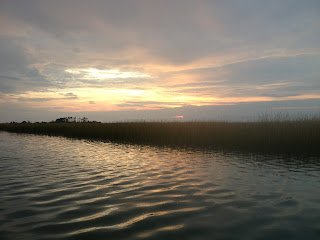 We arrivied at the launch early before we were able to get on the water.  A few familiar faces were out there  as well as some new ones.  We stopped to chat for a few minutes before we were let in by someone who could be described as "an old salty dude".  Fees paid and paperwork filled out we started unloading the boats.  The light was starting to peak over the horizon.  I really wished I had my good camera out there with me.  Even with the clouds and rain the sunrise we beautiful.  The water was crystal clear for us also.  The first thing I noticed were the bugs.  Lots and lots of them at the launch.  After a quick 15min Joe had finally stopped stressing himself out enough to push off at the launch.  We fishing a little on the way out and shortly into it I picked up a 16.5 Redfish. 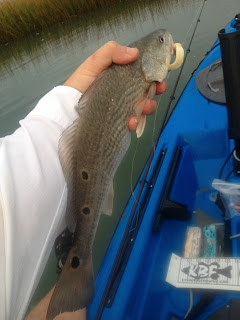 The day was already a success.  I was photographing all my fish when we first got on the water because I figured I could maybe win the most species category.    Shortly after this I picked a small 9 inch speckled trout and a small pigfish. 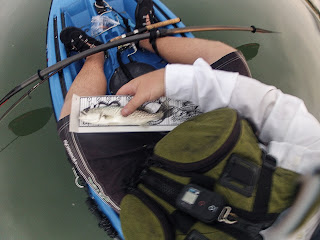 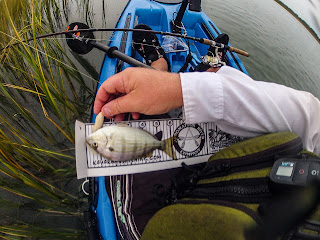 About this time the first batch of rain rolled through. We worked our way out of the creek and fished some moving water trying to find flounder.  The flounder fishing quickly became a pain as the wind and tide were working together and after getting hung up on structure a few times I was about tired of it.  Joe came over the radio and told me he was on some fish so I decided to head over.  This was also just after seeing a school of sharks swimming underneath me.  Yep time to move.  I paddled over and found Joe hooked up with some nice fish and began catching them myself. 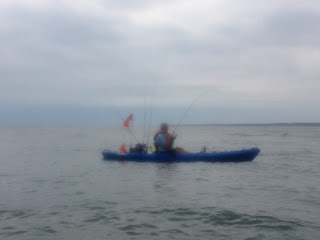 I floated over the area and saw that there were a few nice cuts and began fishing them.  This is where I began picking up flounder.  The first was small but I was happy to have caught a inshore slam.  Last years tournment I guess there was only 1 of these caught.  I continued picking through 14-16 inch reds looking for something a little bigger.  Joe had a few in the 17 area.  I eventually found a bigger flounder.  I was one 14+ inch speck away from having a qualifying slam for the tourney. 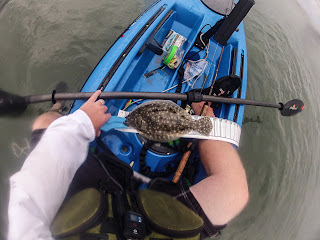 After a good 45 min of picking through these fish we decided to head on over to another spot we had wanted to get to.  In fact I wont bother telling you where this is because its not even on any maps yet!
As we approach I see one of a kayak fishers favorite thing to see. TAILING FISH!  I threw my lure and had a fish on the second it hit the water.  The splash from the hooked fish literally spooked a 20X20 ft school of reds.  It began peeling line off my ultra lite rod.  after a short battle he was in the kayak.  This fish was right at 18 and had some shoulders on it.  Compared to the other reds that I had been into the past few weeks.  Caught Photo'd and Released.  It was time to get back at it. 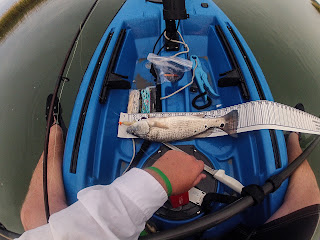 I drifted back further up this small creek and tried different fishing methods.  Again I had to pick through a smaller class of fish and a few small flounder.  The previous fish that went nuts and decided to break dance in the cockpit of my kayak had thrown up a bunch of shrimp.  I switched my baits to shrimp bodies and had a few nice hits.  This soon produced a nice speck. 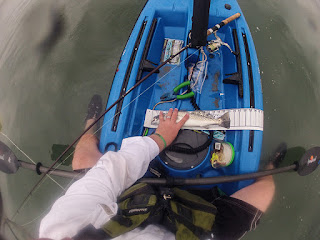 At this point in the day I think the wind started to turn on and the rain really started to fall on us.  The was going one way and the wind pushing us the other.  I was fishing one bank that if I was a fish I would more then likely hang out there.  It looked good.  I casted into it and my drag went off again.  Another nice red.  Again as he was trying to rearrange the footwell of my kayak, shrimp bits were flying out everywhere.  Between the sand fish slime and shrimp I had fresh eastern shore trailmix now! 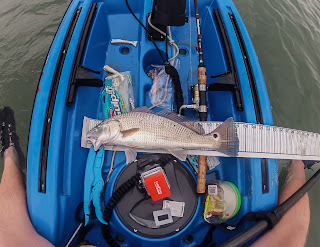 The rain really picked up along with a cold north wind.  The wind combined with the tide were working against us.  We decided to make our way back across the stretch of water.  It was about a mile maybe a little more.  It was a hard paddled but eventually made our way through the seas that rose up to around 3 feet in no time.  We came to a spot where we could get out of our kayaks and stretch.  We took a 15 min break to rest and relax.  A few other kayaker did the same that as they had just made that same crossing as we were getting ready to leave. 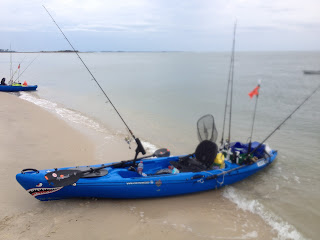 We had about 2 hours to burn until our preset time deadline would be up.  We worked our way back up to the launch picking off some small stuff but nothing very impressive.  After 6+ hours in the cold, wind and rain We both had enough of being freezing and decided to call it a day.  Got back to the launch and loaded the Jeep up and made my way home to a nice hot shower.  Met back up with everyone at Lake Wright for a few beers and some food.  I was happy to have my wife come along with me and meet a few friends.  Beer and laughs were exchanged throughout the evening and turned out to be a good time with friends.  All in all it was a good day.  Had it not been a tournament you wouldn't have caught me out on a day like that but I exceeded my expectations for myself.  I'm going to steal a phrase form someone.  "Plan your fish and fish your plan".  That is exactly what I did and I was happy to have tournament class fish.  I am looking forward to next's years event.  Hopefully by that time the bug bites all over my leg will have healed up! 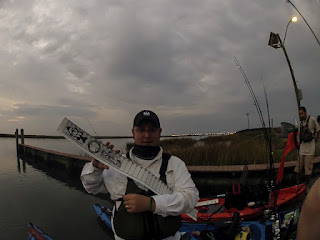 First picture on our camera roll had to be us holding tournament rule with green wrist identifier. 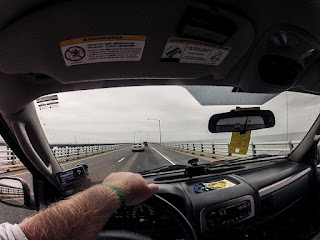