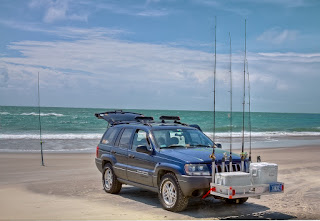 I wish I could say that I have tons of pics of me hoisting up big red drum or bluefish but there really wasn't a whole lot of catching during this trip.  Once again my curse with the OBX was in full effect.  We had to battle weather which limited our time on the beach alot. After our vist to the permit office to obtain a 2012 ORV permit (ripoff) we headed out to ramp 43.  The wind was somewhat light out of the southwest with a forcasted change of NNE later that night. 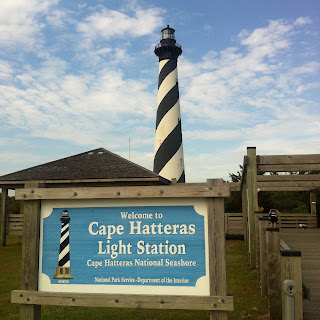 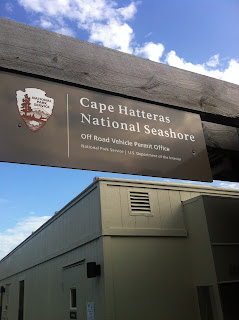 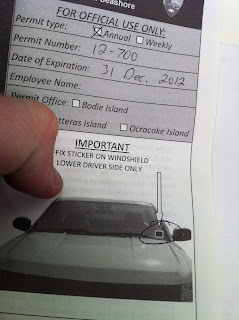 So much of the day spent at 43 was spent sitting back relaxing with my fiance.  The other thing I really caught was a good buzz...not a bad thing.  Mandy got a field promotion and let her drive on the beach.  She did pretty good getting on and off the beach and dealing with the 4X4.  Ramp 43 can be tough to get off of sometimes, even i have had problems with it in the past. 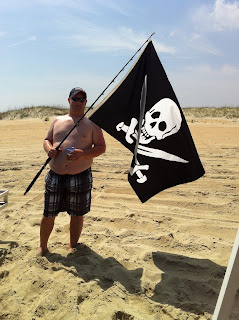 The trip was a nice get away for us with the upcoming wedding and all the craziness associated with it.  It was a nice relaxing trip for the most part. 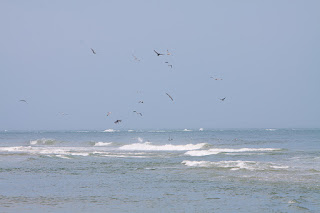 What any fisherman loves to see.  Diving birds! 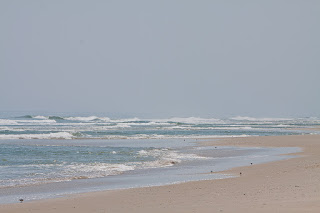 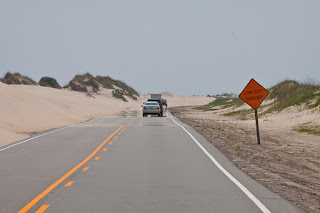 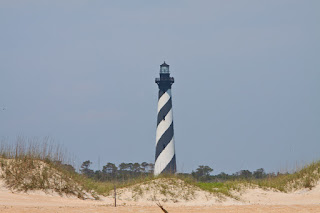 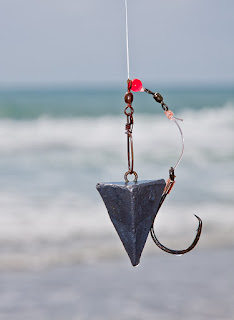 Fishfinder rig typically used in surfishing in the OBX

We left the beach Saturday around 5:30 to clean up and grab something for dinner.  Pretty much just as the clouds and storms rolled in.  They stuck around for the rest of the night so we called it an early one to get ready for our day trip across to Ocracoke Island.

We woke up early and hit the Orange Blossom Bakery and Cafe and got some breakfast.  We missed the ferry by about 5min and had to wait an hour for the next one.  It was a pretty nice day at this point with lots of sun and some occasional clouds.  We had maybe 8 cars on teh ferry on the way over to Ocracoke.  This is where things get pretty interesting. 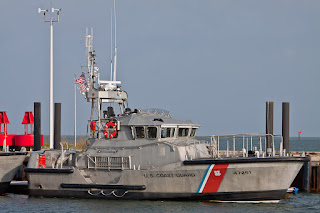 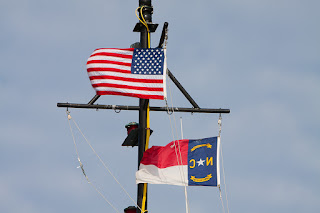 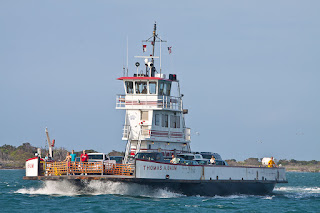 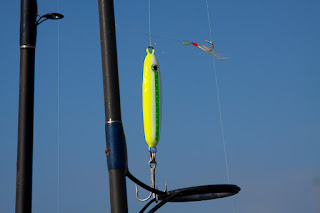 As we are crusing along in the ferry to Ocracoke we end up running aground in the shoals that have formed from the low tides and heavy currents.  Nothing beats looking over the side of the rail and seeing  2 foot deep water.  The Capt of the boat did a good job of getting us off pretty quickly and in no time we were cruising back in deeper water.  Later found out that this had been happening alot the past week. 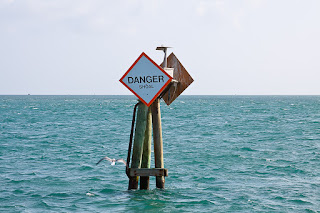 Shoal we got caught up on briefly.
Honestly if we had been stuck out there for a few hours I wouldn't have minded one bit.  It was beautiful on the water at this point of the day.  It was literally "Gin Clear".  We made ti across the rest of the way without incident and got the wheels back on dry land.  Ocracoke is a 11 mile stretch of land with a small village at the end of it.  A very quiet and quaint little town that is pretty much in the middle of the ocean.  It is one of my favorite places to visit because it is so secluded.  Once you are on the beach the sand gets real white and the beach widens out.  In the past I have had good luck fishing there.  Again as soon as we got on the beach the weather struck.  The winds changed to that NNE and they started to blow hard. We maybe spent 2 or 3 hours out there before we called it quits and I decided to head back and figure something out for us. 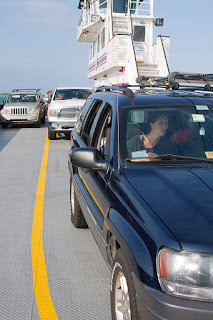 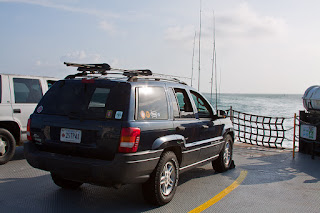 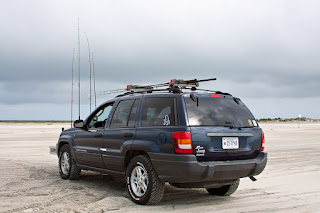 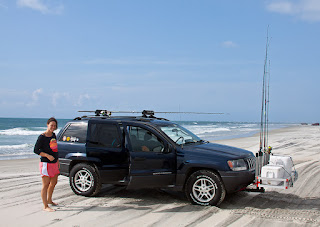 Mandy on the beach 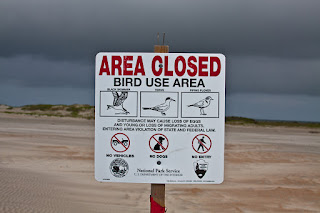 NPS puts these signs up to keep YOU off the beach.... 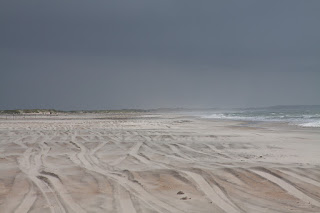 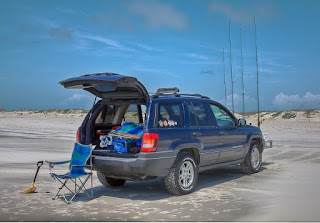 HDR of the Jeep before the weather drove us away.

We air'd the tires up and headed back to the ferry.  We arrived at about 1230 and were inline to make the next ferry out at 1PM.  We waited and waited and the NC Ferry staff went car to car and told us that due to heavy winds, heavy currents and low tides the channel was impassable at this point in the day.  We didn't get out of Ocracoke until 530.  We barely made it out.  The place where we had gotten hung up earlier in the day was causing all sorts of problems for the ferry's all day long. As we came up to the spot the captain throttled the boat back and kept us stationary while Towboat US was working on getting a few charter boats off of the bar.  We were told to go in the lounge or stay in our vehicles as we passed this area due to the possibility of running aground in the extremely shallow water.  I will say the Capt did a great job steering that boat through there without us getting stuck. 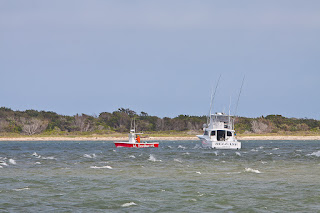 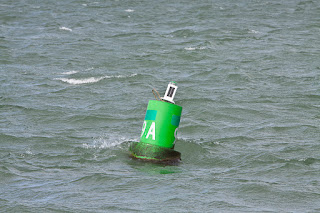 Channel marker where we were hung up.

The rest of the trip was pretty uneventful.  We made it across without any other problem and cruised on home.  It was a fun trip overall and just really nice to get away.  I think the Captain on the ferry did a great job and I wont think twice about going back to OI in the future, I just may keep my eye on the tide and weather a little more.  Its 10AM Monday and I don't think the ferry's have started running again.  I guess its not that bad being stranded on the beach tho is it?

Panoramic of the morning trip over 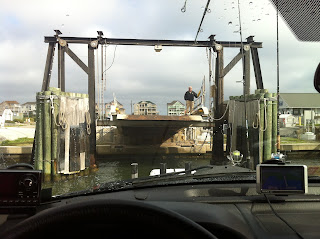 pulling back into Hatteras 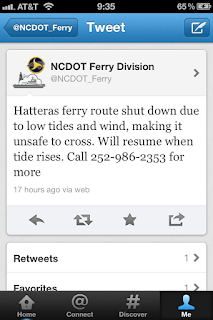 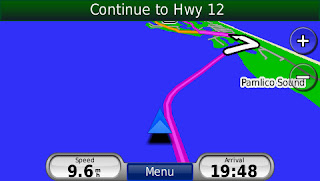 Looking forward to my next trip down hopefully with less weather and more tide.